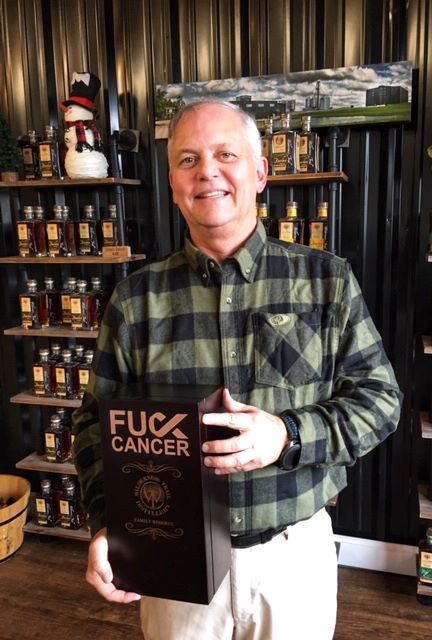 Kevin McGuire of Danville (in photo) was the first person to receive one of the 50 box sets of the 16-year-old Bourbon.

Shane Baker and Pat Heist purchased a 15-year-old barrel of Willett Distillery Bourbon at Willett-To-Be-Cured, an auction for the American Cancer Society. After a year of aging at Wilderness Trail, it was bottled to be sold this holiday season as 16-year-old.

Sales of the $2,500 box set all go to Bourbon Charity. The majority of Wilderness Trail’s donations through the Bourbon Charity will go directly to families who are battling cancer. Some of the funds also will go to public non-profits such as St. Jude and the American Cancer Society but the mission of this project to give direct to families.

Many of the people who contacted us about the Bourbon shared that they too have family or friends who have battled cancer and that is the reason they wanted to support the project. Even if the $2,500 bottle is not in the budget, if you want to make a donation, you may go to Bourbon Charity.

Most of the 50 bottles available were placed in the main lottery for people who signed up online at our website or in our visitor center.

We still have fundraising plans. That Bourbon barrel is going to get another chance to continue raising money to battle cancer. We distilled a special barrel of four-grain Bourbon almost 5 years ago.We are going to double-barrel it and finish it in this infamous old barrel for a while longer. Then we will have bottles of some more great, rare Bourbon to talk about and keep asking the question: How many lives can this one barrel keep touching?

What’s next for the barrel after that? Stay tuned.

Welcome to the Family

Join us to get our latest updates & savings from our online store.